MUST Students sensitize morethan 320 households in Ibanda on Anthrax disease.

Following a confirmed Anthrax outbreak in Ibanda Municipality  in August 2022 in which several persons suffered and one life was lost, students in one health club of MUST responded to sensitize the community on Anthrax and the dangers of eating meat from dead animals.

On October 27, 2022, a section of Twenty (20) Undergraduate and Two (2) Postgraduate students pursuing Health related courses reached out to communities of Katooma 1, Katooma 2 and Kasita cells in Kagongo division, Ibanda Municipality. The students were accompanied by Dr. Catherine Atuhaire, the patron of One health club and Dr Fred Bagenda, a senior lecturer in the department of community health. to the students sensitized the community on Anthrax disease and the dangers of eating meat from dead animals. Anthrax is a serious zoonotic disease that affects both animals and humans. The humans get the disease through the consumption of the meat of dead animals.

The students were supported by the First Mile Community Health Program. The team fo students were received and welcomed by Mr. Mugisha Vicent, the District Surveillance Focal Person (DSFP). The DSFP updated the students on the recent Anthrax outbreak in the area and possible drivers of this outbreak.

The students conducted a radio talk show hosted by Rwenzori FM. The show focused on the Mobilization of the community for the upcoming sensitization activities by the MUST students. This was led by the DSFP, and the MUST team (Dr. Fred Bagenda, Mr. Paul Tumwesigye, and Ashaba Caroline)

During the talk show, Mr. Victor introduced the MUST team and further explained how they had an outcry about the outbreak of Anthrax in the area two months ago. He also thanked the MUST team for coming to their rescue. Dr. Fred explained what Anthrax was and the preventive measure one should adhere to prevent contracting the disease.

Mr. Paul spoke about First Mile and how their activities in Ibanda aligned with their objectives. One of the undergraduate students Carol being the last speaker of the talk show health eductated the listeners on how Anthrax spreads, the incubation period for the bacteria, and its signs and symptoms.

The next day, the DSFP led the team to meet the District Health Officer (DHO), Dr. Julius Bamwine who was grateful for the initiative First Mile was taking in Ibanda. He permitted the team to carry on the activities of sensitizing the community members with the assistance of the LC1 chairperson of the village we were assigned to.

After that, the team headed to the Ibanda District Local Government where they met the District Agricultural Officer Dr. Bwengye Peter who informed them of how they were procuring the Anthrax vaccine to be given to the high-risk members of the community. According to Dr. Bwengye, the outbreak was caused by eating meat of a dead slaughtered animal that was illegally brought into Ibanda District from the neighboring district of Kazo.

While at the District Local government offices, the LC 5 chairperson Mr. Happy Herbert Mayanja who gave an insight of how the Anthrax outbreak began and how they tried to curb it.

Lastly, the team met the Chief Administrative Officer Mr. Kweyamba Ruhemba who was delighted that we fulfilled our promise of coming to sensitize the communities amidst the outbreak following the letter addressed to his office requesting for permission to allow First Mile to carry out their activities in Ibanda district.

According to Joel Ssenyonga the Chairman of the Slaughtering committee in his village, he put the blame on the veterinary doctors who don’t take the members of the community seriously because they respond to their calls after a long period of time, or some just ignore, and he also blamed the slaughter men for not being cautious and this has contributed to the spread of Anthrax. 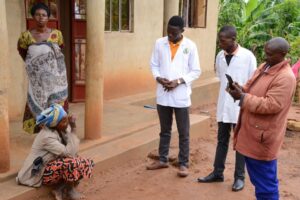 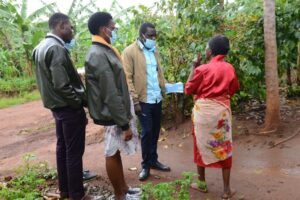 Here is what some of the Undergraduate students had to say about this exercise.

Ms. Namuwaya Mwanja Valeria cherished First Mile for the support given to them to serve the community by using the skills they obtained from the school.

“We have been able to build our communication skills and be able to sensitize the people about Anthrax additional to that we had to interact with the community to get their thoughts and beliefs about Anthrax.”

Ms. Najjingo Daurice Patricia was happy and pleased that she was among the selected few to participate in this exercise.

“It has been a great opportunity to get a chance to sensitize people about Anthrax. I was amused by one of the community members whom we met during the sensitization who thought that Anthrax is caused by over-smoking. So, it brought me Joy when I was able to tell them the actual cause and they understood”