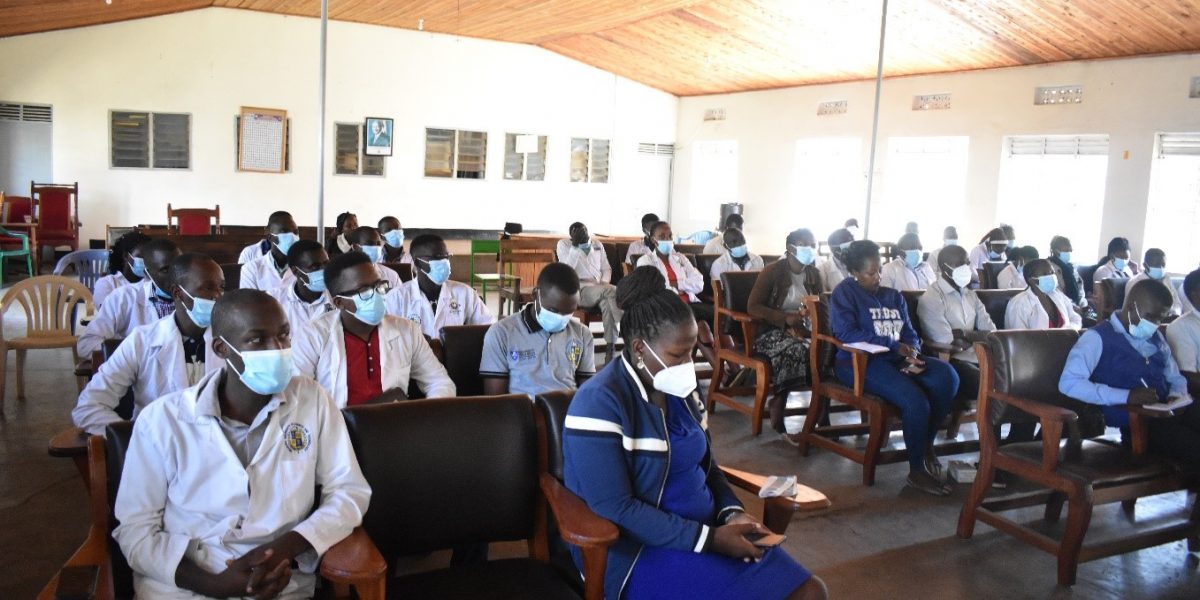 This committed team of undergraduates comprised of students of Human Medicine and Surgery, Medical Laboratory, Nursing, Pharmacy, and Pharmaceutical Sciences. Using their expertise so far attained combined with technical guidance from dedicated supervisors from DoCH, conducted Community Total Led Sanitation (CTLS), Deworming exercise for children under five and disinfection of the community using chlorine. This benefited both the host and refugee communities in the Bunagana town council.

On Friday, July 22, the Kisoro District Local Government leadership led by the Local Council 5 (LC5) Chairperson, Assistant Chief Administrative Officer (CAO) and Deputy Resident District Commissioner (RDC) welcomed the team from MUST. The team was granted permission by the leadership to conduct the emergency response outreach

The team leader Associate Prof. Edgar Mulogo who also heads DoCH and is the Program Director of the First Mile Community Health program at MUST thanked the Kisoro District Local Government leadership for the warm welcome.

‘’As MUST, we are dedicated to responding to community needs in our catchment for which Kisoro is part through health outreaches and other health service delivery programs. Early this month, July 06-07, 2022, we worked with local authorities here to map the affected areas where we found the glaring challenge of Water, Sanitation and Hygiene (WASH) in Bunagana Town Council. As a team, we plan to deworm children under 5 years, sensitize the community on sanitation and disinfect six villages in Bunagana Town Council. We hope that our partnership with Kisoro district local government will be strengthened and sustained through these engagements,’’ Prof. Mulogo said.

According to the Assistant CAO Mr. Rukundo Monassey, Kisoro district particularly the Bunagana Town Council is experiencing an influx of refugees due to the ongoing conflicts in the Democratic Republic of Congo (DRC) and this has caused health concerns such as sanitation, insufficient drugs and few health experts. He acknowledged MUST for assisting them in handling such health concerns.

‘’Kisoro has had many disasters such as landslides and an increasing number of refugees due to conflicts from the neighboring countries. We should be given more attention from both the central government and other agencies to assist us in addressing challenges resulting from these incidences. The situation might worsen during rainy seasons when diseases such as cholera will spread within the communities,’’ Mr. Rukundo expressed concern.

Mr. Kundo noted that the outreach came at the right time because Kisoro has a lot of health needs in the community. The district expects to have long-lasting interventions intended to have a healthy Bunagana town council and the entire district. He commended MUST for fulfilling the principle of decentralization through taking services nearer to the people.

I would like to thank you for choosing this community to ensure that the refugees and host people are clean and safe. We are going to add MUST on the list of our implementing partners to help us when the need arises,’’ he happily said.

Hon. Abel Bizimana, the LC5 chairperson of Kisoro District Local Government, welcomed the initiative of organizing emergency response outreaches within the communities, especially those targeting vulnerable groups of people like the refugees. In his speech, he briefed the team from MUST about the historical background of the Kisoro district which should be used in identifying and designing health interventions for better service delivery. He stayed hopeful that the presence of MUST in Kisoro, would create a long-lasting impact in the region.

While flagging off the team to kick start their activities in Bunagana town council, Mr. Robert Tukamuheebwa the Deputy RDC for Kisoro District Local Government assured the team reinforced security and pledged to offer every support the team would need.

A total of 1120 children under five years were dewormed from over 100 households. This was in addition to health sensitization on CTLS and disinfection of Bunagana town council, Kibaya, Gatsibo, Kanyampiriko, Nyarutovu, and Kara villages using chlorine to kill the germs are likely to cause an outbreak of cholera following widespread open defecation in the areas mentioned.

A community health worker of Gatsibo village revealed that all the pit latrines for the host communities became full when refugees stormed the area and the only available option for the increasing population is to disperse their fecal wastes to any place. He thanked MUST for coming to their rescue to spray and disinfect the areas before the rain starts which is likely to disperse the fecal matter resulting in the outbreak of cholera, typhoid, and other related diseases due to poor sanitation.

According to security sources, when rebels attacked in DRC, more than 80000 Congolese runaway to seek refuge in Uganda. Whereas the government set up an official centre to receive refugees at Nyakabande Transit Center (NTC) in Kisoro District, most refugees stayed at Bunagana and mixed with the local community. This is based on the fact that they hope to return to their country when the situation stabilizes. Currently, these refugees reside on verandas, uncompleted structures, gardens, and compounds of the host community. Because of increased numbers, open defecation is widespread with poor sanitation.

A one Joseph Selumondi Nsaba, a resident of Busanza village, Bunagana Town council said that through this outreach, the natives and the refugees are now aware of safeguarding themselves from diseases resulting from poor sanitation and he called other agencies/organizations to come to their rescue and carryout similar outreaches because refugees brought both security and health threats in their society.

This outreach was one of such unique responsive activities of the First Mile Community program, DoCH, MUST that aims at strengthening health services delivery to the people within their first mile of seeking health care services.