Biomedical engineering in the disadvantaged community 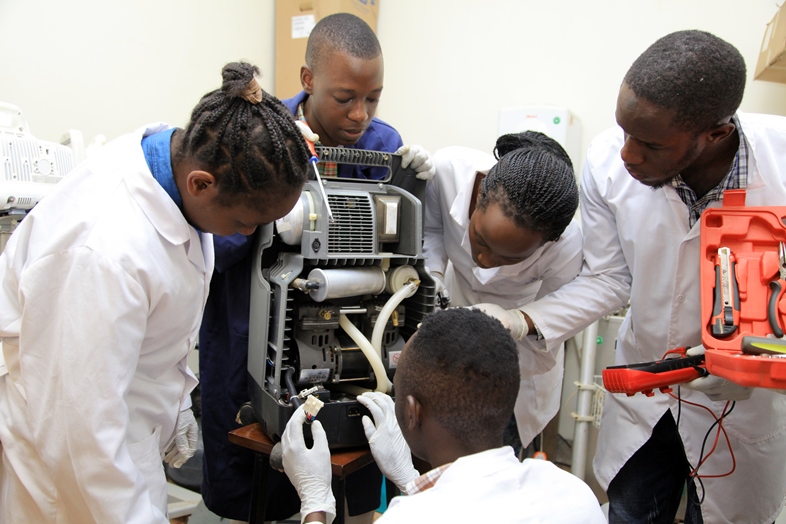 Ms. Theodora the faculty dean opened the ceremony and she urged the students to strive for technical competence, through reading newspapers, magazines and she stressed the need and importance of innovation and rehabilitation engineering which is supported by the Bio Medical Engineers.  She challenged the students by asking them why they should import prosthetics yet the BMEs in Uganda could do the same thing that is being imported. Her speech concluded by urging the students not to only be good BMEs but also pick skills such as leadership for the highly competitive world.

A pediatric occupational therapist hinted at the fact that the Bio Medical Engineering sector is still a virgin field and so many people need their services.

“Innovation improves the quality of life.” He said.

The students were supposed to present their projects in their groups and a set of 3 judges was occasioned for the event comprising Dr. Elon, Dr. Wasswa, and Ms. Natukunda Faith who serves in the department of mechanical and industrial engineering and also as an assistant lecturer at the university.

The name of their project was an integrated standing frame that aimed at alleviating the problems and challenges experienced by cerebral palsy and to a less extent the spina bifida patients. It bragged of improved stability, less cost, more modernization, and better user-friendly features.

Their project was called the ACP trainer and comprised of a camera, the wheels, and a time and alarm system. This also focused on the problems of cerebral palsy and spina bifida patients

Team Magara developed a mobile application that looked to create an environment for the caretaker of the patients and to less extent the medical worker that solved and eased the work caretaker, one of the features enabled the caretaker to set alarms and notifications that could remind him or her to administer the medication of his or her patient on time.

This team developed the raid wheelchair to solve the problems of spina bifida and this was laid out on their methodology, prototype and their proposed solution looked to curb the problem statement that they encountered while at OURS-ruharo hospital.

Team Magara was announced as the winning team and the Dean of Engineering Faculty handed over a cheque of 1.5 million shillings to the team for the exceptional performance and also certificates to every participating member.