The virus is transmitted to people from wild animals (such as fruit bats, porcupines and non-human primates) and then spreads in the human population through direct contact with the blood, secretions, organs or other bodily fluids of infected people, and with surfaces and materials (e.g. bedding, clothing) contaminated with these fluids. One important advantage with Ebola is that it is not spread through air (Breath), unlike COVID-19.

The first EVD outbreaks occurred in remote villages in Central Africa, near tropical rainforests. The 2014–2016 outbreak in West Africa was the largest and most complex Ebola outbreak since the virus was first discovered in 1976. There were more cases and deaths in this outbreak than all others combined. It also spread between countries, starting in Guinea then moving across land borders to Sierra Leone and Liberia.

It is thought that fruit bats of the Pteropodidae family are natural Ebola virus hosts.

The average EVD case fatality rate ranges between 20-90% depending on the virus type. The current Epidemic facing Uganda is confirmed to be caused by Ebola Sudan, this is known to have a fatality rate between 40-60%. This is lower than Ebola Zaire that has rate of 60-90%. That said, this is still a very high mortality rate, averaging around 50% and thus capable of claiming the lives of half of all infected cases even with availability of specialized care.

The incubation period, that is, the time interval from infection with the virus to onset of symptoms, is from 2 to 21 days. A person infected with Ebola cannot spread the disease until they develop symptoms.

Symptoms of EVD can be sudden and include: fever, fatigue, muscle, pain, headache, and sore throat. This is followed by vomiting, diarrhea, rash, symptoms of impaired kidney and liver function, and in some cases internal and external bleeding (e.g. oozing from the gums, blood in the stools). Laboratory findings include low white blood cell and platelet counts and elevated liver enzymes.

It can be difficult to clinically distinguish EVD from other infectious diseases such as malaria, typhoid fever and meningitis. A range of diagnostic tests have been developed to confirm the presence of the virus. 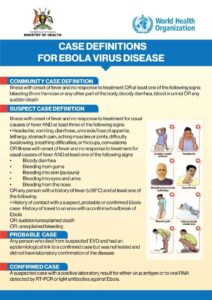 There is currently no widely available curative treatment for EVD. A range of several treatments are still under clinical trials and are hugely expensive. A few vaccines have also been tried but none has so far proved sufficient efficacy to warrant widespread use. In our setting, supportive care – rehydration with oral or intravenous fluids -, blood transfusions for those who loose excessive blood and treatment of specific symptoms is the only available option but has been proven to improve survival significantly.

The main strategy against the spread of Ebola  is generally prevention of new infections. This is mainly achieved through: Early case detection, contact tracing and quarantine, prevention of contact with symptomatic individuals by use of proper infection prevention practices. 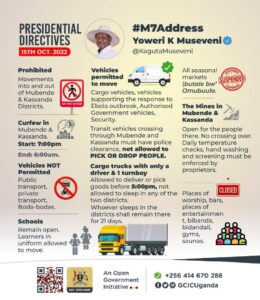